[Sun Oct 7, 18:10pm] Added a third driver file, which takes the name of the Sally script file from a command line arg.

The objective of this programming assignment is to have you become familiar with some of the templated data structures in the C++ Standard Template Library (STL).

In this project, you will implement an interpreter for a FORTH-like programming language. In FORTH, arithmetic operations are written in Reverse Polish Notation (RPN). In RPN, the operands are written first, followed by the operation. For example,

would be written as

The main “advantage” of RPN is that parentheses are unnecessary. For example,

This greatly simplifies the job of a FORTH interpreter or compiler since it does not have to do very much parsing. (A standard joke about FORTH is that it is a programming language that uses the programmer as the parser.) In fact, a FORTH compiler can be written in assembly language from scratch quite quickly. (Using STL, you will put together a FORTH interpreter in hours.) FORTH was implemented on many small computer systems in the 1970’s and 1980’s and was popular among astronomers. Today, vestiges of FORTH can still be found in the Postscript language and, to a lesser extent, in PDF.

FORTH is a stack-based language. The best way to think about the RPN expression

is to imagine a stack that holds the operands for each operation. Initially, 2 and 3 are pushed onto this parameter stack. When + is executed, it takes the two parameters 2 and 3 off the top of the stack and pushes their sum, 5, on the stack. Next, 4 and 5are pushed onto the stack, and then, the second + replaces them with 9. Finally, the * operation takes 9 and 5 off the stack and replaces them with the product, 45. In FORTH, almost everything is done in reversed notation, not just the arithmetic operators. Even if statements and loops use the parameter stack.

We will call our FORTH interpreter “Sally” which is an acronym for Yet Another Little Stack-based Language. (Since ordering is scrambled in FORTH, the acronym is “Sally” rather than the unpronounceable “Yalsl”.)

For this project, we will start you off with a working interpreter that only has arithmetic operations ( +, -, *, /, % and NEG ) and printing commands ( ., SP and CR ). The source code for this calculator is here:

Your assignment is to expand the interpreter to handle stack operations, variables, comparison operators, logical operators, if statements and loops.

The calculator program has a lexical parser that groups the characters of the input into tokens. The lexical parser also ignores comments that come after // and recognizes string literals between ." and ". Other than comments and string literals, the tokens are the characters separated by white space (the space character, tabs and newlines). If a token can be converted into an integer, the lexical analyzer will indicate that the token is an integer. String literals are also indicated. Everything else is labeled “unknown”. In the code above, the Sally class has a nextToken() member function that the interpreter calls to get the next Token of the input. The nextToken() function in turn calls fillBuffer() which implements the lexical parser.

The lexical parser will keep placing tokens into a buffer until the end of the input or a blank line is encountered. (A blank line has no characters, not even spaces and tabs.) When a blank line or end of file is reached, control is given back to the “main loop” of the interpreter. This arrangement allows us to use the interpreter in an interactive manner (type in a code fragment followed by a blank line) and also have the interpreter read from a file. Here’s an example of a program that the calculator can handle:

Running this source through the calculator program produces this output:

The main loop of the interpreter does the following:

Here is a visual diagram of the interpreter: 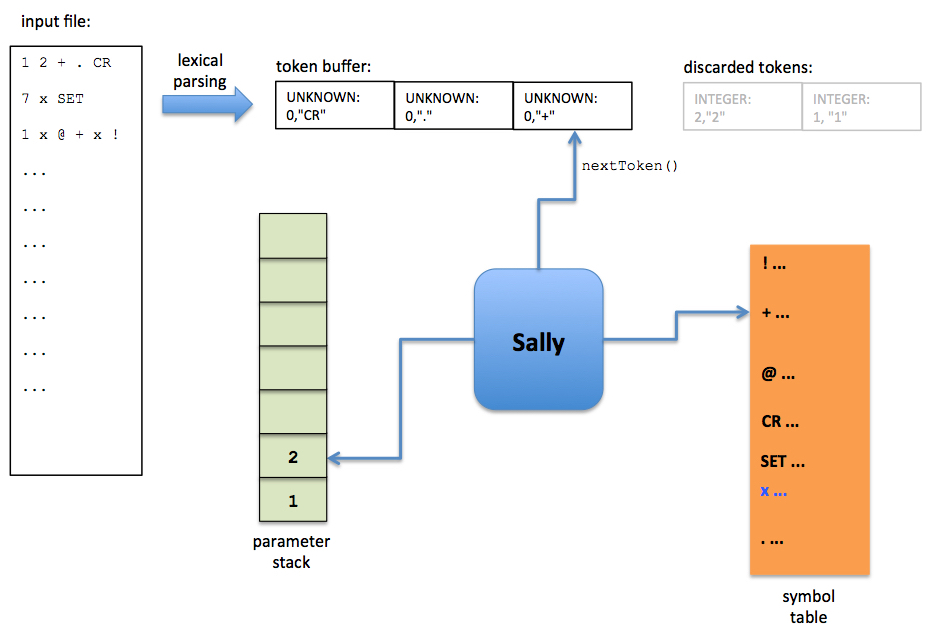 The code for the main loop of the calculator program looks like: (The loop exits when nextToken() throws a EOProgramexception.)

Here Token is a data-only class with 3 data members. The member m_kind says whether the token is an INTEGER, STRING or UNKNOWN. (See class definition of Token below.) The member m_value is the binary int value of the token, if the token happens to be a number. Finally, m_text is the original text string of the token.

In the interpreter, the token buffer tkBuffer is an STL list of Tokens. Similarly, the parameter stack params is an STL stack of Tokens. The symbol table, on the other hand, is an STL map from string to SymTabEntry. The class SymTabEntry is defined as:

That adds an entry to the symbol table for the keyword CR with the address of the function doCR. What is doCR? It is declared as a static member function of the Sally class:

The definition of doCR in Sally.cpp is:

Thus, when interpreter encounters CR in the Sally FORTH program, it will invoke doCR() and print a newline to the standard output. It may seem rather convoluted, but using a map this way reduces the number of string comparisons that we have to make. (And, it gets you to practice using the STL map class.)

Where does Sptr come from? When the functions doCR and doPlus are invoked in the main interpreter loop, the pointer to the host, the this pointer, is passed as a parameter:

Finally, these are the operations that you have to add to the Sally FORTH interpreter:

Here are the specifics of the assignment, including a description of each operation that you have to add to the interpreter.

Requirement: For all operations involving the parameter stack, if there are not enough items on the stack, your interpreter should throw an out_of_range exception.

the top two items of the parameter stack are 15 and 15.

the top item of the parameter stack is 41 and the second item from the top is 79.

will create a symbol table entry for a variable named Lucky and initialize it with the value 13. Duplicate definitions are not allowed. If the symbol table already has a value for "Lucky", an error message should be printed out and the interpreter should carry on. (This also prevents variable definitions from redefining keywords.)

The @ operation (pronounced “at” or “fetch”) retrieves the value of a variable and places that value on the parameter stack. For example:

will place the value 13 on the stack. If no such variable exists, the interpreter should print out an error message and carry on.

The ! operation stores a value in a variable. For example:

stores the value 17 in the entry for Lucky in the symbol table. If no entry exists for a variable, the interpreter should print out an error message and carry on.

We will use the C/C++ convention that 0 represents the Boolean value false and anything else is true. Each of these operations will take two values from the top of the parameter stack, compare them and push the Boolean result of the comparison. The order of the operands is the same as the infix comparison. That is,

should result in “true” being pushed on the stack. On the other hand

should result in false.

Logic operations: AND OR NOT

If statements: IFTHEN ELSE ENDIF

If statements in FORTH assume that the top of the stack has the Boolean value to test. For example:

should print It's false!. On the other hand,

should print It's true!.

Loop construct: DO UNTIL

A DO UNTIL loop will execute the body of the loop until a Boolean value is true. For example, the following loop will print out 1 through 10 (inclusive).

These files are also available on GL in the directory:

If the UNTIL operation stops the loop, the saved tokens should be discarded and the interpreter should switch back to “discard” mode.

This technique does not work for nested loops. (Why?)

For 10 points extra credit, implement nested DO UNTIL loops. Hint: make a stack of lists of Tokens to save the bodies of the loops. Be careful that you do the right thing when an inner loop terminates. What should you do with the inner loop’s body?

You must submit the following files to the proj2 directory.

The test.sally program (written in Sally FORTH) should include tests showing the parts of your interpreter that work correctly.

If you followed the instructions in the Project Submission page to set up your directories, you can submit your code using this Unix command command.

End the stress headache. From Online Classes, to Essays & Programming/Problem sets, get help from Expert Tutors

Accepts All Types of Payments

Boost Your Grades With Us